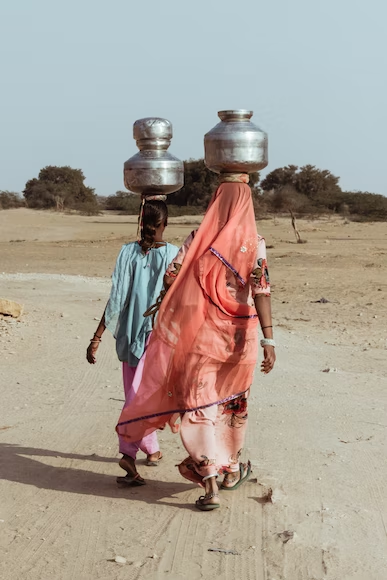 India is currently facing a crisis - a crisis far larger than the coronavirus pandemic. India’s water crisis is the biggest that the country has ever experienced, due in part to overuse of water and mismanagement of India’s water supply and the effect that global warming has had on water resources. In total, around 1 billion people in India do not have reliable access to clean drinking water. This crisis will only escalate, and the effects it has on the Indian population are innumerable.

Water scarcity is a national issue but it affects the India’s population unequally, and crucially the lack of water affects farmers and poorer people disproportionately. Climate change has seen farmers struggle with watering their crops - causing a loss in crop yields and additionally, urban populations have become more reliant on using groundwater as their primary source of drinking water.

What is the effect of water scarcity on poor people in India?

The rural poor population bear the brunt of the effects of water scarcity in India. A high number of rural villages in India do not have access to clean drinking water and have to rely on stagnant pools of water or nearby streams. These communities are too poor and vulnerable to purchase expensive filtration systems to ensure that the water that they do collect is clean and safe to drink. Unfortunately, unfiltered dirty water leads to a high level of deaths related to waterborne diseases and children under 5 are particularly affected by this death toll. Even the children who survive to adulthood are affected - as living with water insecurity can increase the risk of malnutrition and the incidence of disease too.

How has the Indian government tried to help the rural poor?

There is deep inequity between the rural poor and the rest of the Indian population, but there has been some attempt to bridge this inequality gap by the Indian government. They have provided low-cost toilets and have been expanding public wells, but the disparity between Indians who can afford clean drinking water and those that cannot is not rapidly improving.

What is the effect of water scarcity on farmers in India?

In some states, for example in Maharashtra, over half of the available land isn’t arable due to a lack of water. Farmers turn to extreme measures such as drilling deep into thousand-year-old aquifers and pumping up dried wells in an attempt to get water for their crops. However, these practices can lead to irreversible damage to these Indian water resources - once the water runs out, it will not replenish for a long period of time. Farmers have had to turn to crops that require less water such as millet or groundnuts, which means they have to turn their back on crops which require more water but are more profitable such as tomatoes and sugar cane. As a result, the water crisis helps to limit farmers’ social mobility and keeps the poorest farmers stuck in a cycle of poverty.

What will the future look like in India if the water crisis isn’t solved?

If the water crisis isn’t solved, the outlook is bleak. The water crisis presents a great risk to the country’s economic and social stability and the country’s security. The World Bank estimates that by 2030, there will be a 40% increase in demand for water in India, which would lead to acute shortages for 600 million people who live close to the poverty line. The water crisis could also lead to increased crime rates and intensify conflicts between communities over limited water supplies.